In this series, this is the study material for bank promotion (Notes on Negotiable Instruments Act).  Read the underlined words carefully as they are important part of definition on which questions may be based.

Promissory note (Section 4)
An instrument in writing (not being a bank-note or a currency-note) containing an unconditional undertaking, signed by the maker, to pay a certain sum of  money only to, or to the order of, a certain person, or to the bearer of the instrument.

Bill of exchange (Section 5)
An instrument in writing containing an unconditional order, signed by the maker, directing a certain person to pay a certain sum of money only to, or to the order of, a certain person or to the bearer of the instrument.[See difference between Promissory Note and Bill of Exchange]

Cheque (Section 6)
Cheque is a bill of exchange drawn on a specified banker and not expressed to be payable otherwise than on demand and includes the electronic image of a truncated cheque and a cheque in the electronic form.

Drawer and Drawee (Section 7)
Drawer – Maker of bill of exchange or cheque.
Drawee – Who is directed to pay.
Drawee in case of need – If specified in Bill (or endorsement), a drawee to be resorted in case of need.

Holder in due course (Section 9)
Any person who for consideration became the possessor of a promissory note, bill of exchange or cheque if payable to bearer, or the payee or endorsee thereof, if payable to order, before the amount mentioned in it became payable, and without having sufficient cause to believe that any defect existed in the title of the person from whom he derived his title.

Payment in due course (Section 10)
Payment in accordance with the apparent tenor of the instrument in good faith and without negligence to any person in possession thereof under circumstances which do not afford a reasonable ground for believing that he is not entitled to receive payment of the amount therein mentioned.

Negotiable Instruments (Section 13)
A promissory note, bill of exchange or cheque payable either to order or to bearer.

Transfer of a Negotiable Instrument
By assignment or by negotiation. A bearer NI is transferred by mere delivery.

Endorsement (Section 15)
Signing of an instrument on back, face or slip annexed to it for the purpose of negotiation.

Payable to Order or Bearer
A Negotiable Instrument is payable to order if specified so or payable to a particular person and does not contain words prohibiting transfer or indicating an intention that it shall not be transferable.

A negotiable instrument may be made payable to two or more payees jointly, payable by one of the two, or one or -some of several payees.

When a promissory note, bill of exchange or cheque is transferred to any person, so as to constitute that person the holder thereof, the instrument is said to be negotiated.

Amount stated in words shall be the amount undertaken or ordered to be paid.

General crossing is done to direct the bank to make payment of cheque through a bank only.

Cheque bears across its face an addition of the name of a banker, either with or without the words not negotiable.

A special crossed cheque can be paid to the named bank or his authorized agent for collection.

A person taking a cheque crossed generally or specially, bearing in either case the words  not negotiable, shall not have, and shall not be capable of giving, a better title to the cheque than that which the person from whom he took it had.

Dishonour of cheque for insufficiency of funds (Section 138)

We hope the above study material will be helpful for your preparation for bank promotion. Please give your suggestions in comment box below.

very simple and useful to understand

Thank you for appreciating.

You you can Print in in PDF. Hit Ctrl + P, choose save as pdf and save.

Sir, firstly thank u for such concise notes. I am appearing for clerical to officer promotion exam this year. My question is- will reading these material only will suffice my preparation? And what kind of questions are asked in clerical to officers exam?

Hi, This is not exhaustive material and we suggest you to go through the internal guidelines/ circulars of your bank. 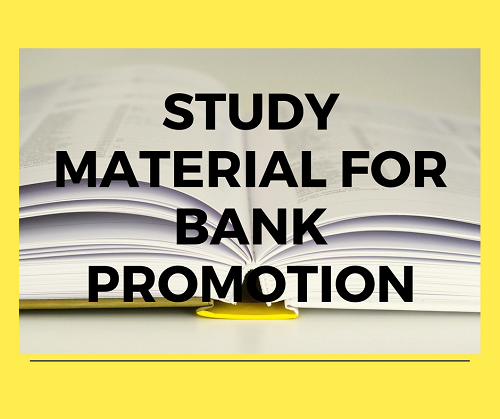