The United Forum of Bank Unions (UFBU) has proposed a 48 hours strike in Banks for early revision of salary of bankers. The IBA in a recent meeting made an absurd offer of 2% hike in bankers salary.

UFBU stated that strike notice has been given to Indian Bank Association (IBA) and Labour Commissioner (Central), New Delhi.

Various bankers questioned the rationale of having strike on 30th and 31st May instead of 28th and 29th. Consequently AIBOC, AIBOA, INBOC and NOBO (four Officers’ associations) have suggested UFBU to change the strike on 28th May and 29th May to have better impact.

“The initial offer of the Indian Banks Association was meagre which was totally rejected by the constituents of the United Forum of Bank Unions…Bank employees and officers are already paid very low compared with the government employees as well as the private sector,” said All India Bank Officers’ Confederation (AIBOC) General Secretary D T Franco on May 5.

The agenda of strike is:

AIBOC, AIBOA, INBOC and NOBO (four Officers’ associations) held a meeting on 11th May in which they decided:

UFBU has also planned demonstrations before branches in all centers on 17th, 24th and 29th May. 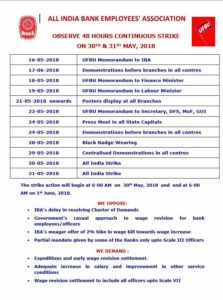 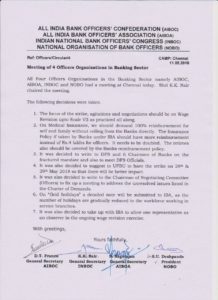 12 Bipartite Settlement for revision of bank employees’ salary and service conditions is due from 1st November 2022. Finally, the Charter of Demands has been submitted by Bank Unions to IBA. Read: How to pass Read more…

The Central Bureau of Investigation has arrested a Branch Sales Manager, ICICI Bank, Bhuteshwar Branch, Mathura (Uttar Pradesh) and a Sales Executive(Outsource employee of said Bank) for demanding & accepting bribe of Rs.50,000/- from the Read more…